By 2035, Germany’s electricity supply is set to be based almost entirely on renewable energies. This is the goal of the “Easter Package”, a set of legislature for an accelerated expansion of renewable energies adopted this summer, which includes an amendment to the German Renewable Energy Sources Act (EEG). Its implementation promises to generate market growth in the renewable energy sector. After the EU greenlit the reform under state aid law in the fall, investors can now reliably include the EEG 2023 in their plans.

Anyone investing in photovoltaics wants to know what returns an investment might generate and what risks have to be taken. How does the EEG 2023 affect returns and risks? This can finally be evaluated on the basis of concrete PV projects, which in turn depend on current boundary conditions such as financing conditions and material and installation costs.

The law’s expansion targets are impressive: 22 gigawatts of photovoltaics are to be added annually in order to achieve the 1.5-degree climate goal. Last year, the installed capacity was around 5.2 gigawatts. This means the rate of expansion must quadruple. Consequently, the number of projects on offer would also quadruple. Will the EEG 2023 enable developers and installers of PV projects to scale their business activities in this way?

In this article, we examine the main legislative changes that will apply starting in 2023 and estimate their impact on the feasibility of PV projects. We do not address the transitional provisions that will only apply until the end of the year.

How attractive are the financial conditions of the EEG in 2023?

We’ll start with the good news:

It is also a good thing that the direct marketing obligation starting from 100 kilowatts continues to exist in the EEG 2023. It offers the opportunity of taking a slice of high electricity prices on the market. What can be deceptive is that in the course of its controls on electricity prices, the German government is currently discussing how it can siphon off “windfall profits” from the stock market. Even retroactive interventions are being discussed, which makes planning on the revenue side and the assessment of project values more difficult. PV projects should be valued independently of any additional revenues from direct marketing

Roof-mounted photovoltaics in the EEG 2023

All PV systems with less than 1 MW installed capacity can receive EEG compensation.

With the EEG 2023, PV systems that feed the entirety of their electricity into the public grid are to once more be made accurate. This should lead to better utilization of roof space. Two feed-in tariffs have been in effect since July 30: one for self-consumption and one for total feed-in. It is possible to switch between the two tariffs in any calendar year. Likewise, two systems can be operated at different tariffs on one roof, provided that separate meters are connected. 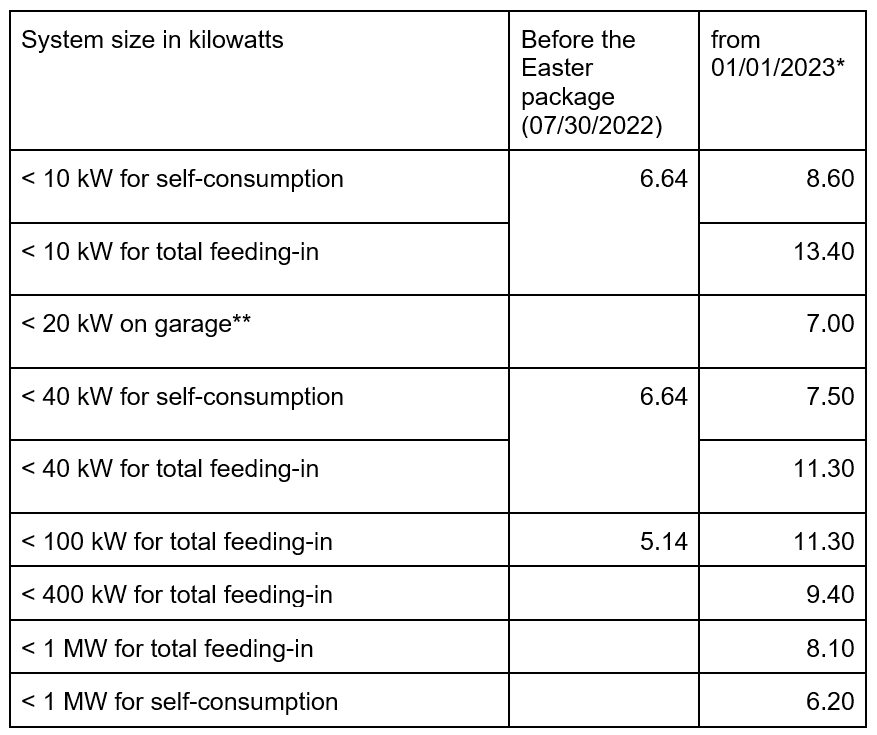 * excepting direct marketing, 0.4 cents/kWh fewer in each case
** concrete scope of application still to be defined by regulation

The threshold above which roof-mounted systems can receive EEG remuneration exclusively through tenders will be raised from 750 kilowatts to 1 megawatt of installed capacity, starting next year. The maximum value of offers permitted for roof-mounted systems is 9 cents/kWh.

Free-standing photovoltaics in the EEG 2023

** concrete scope of application still to be defined by regulation

From 2023, ground-mounted systems with an installed capacity of 1 MW or more must also be put out for tender. For free-standing systems, the maximum value currently permitted for bids is 5.9 cents/kWh.

Free-standing plants may still be operated without EEG subsidies, in which case the electricity must be marketed via so-called PPAs (Power Purchase Agreements or direct supply contracts) and the twenty-year state price guarantee must be waived.

Further advances in the EEG reform

In addition to the marketing proceeds, the following changes are also important for investors:

The range for free-standing systems has been expanded. This includes conversion areas and shoulder strips along highways and railways. In the future, strips with a width of 500 meters along traffic routes may be used for solar power. Drained and agricultural moorland soils have also been added, so long as they are permanently rewetted in the course of the PV installation.

The EEG levy known as the “solar tax”, which was formerly due for systems > 30 kilowatts for self-consumed electricity, has been abolished.

Unfortunately, tax relief and a simplified grid connection have so far only been available for smaller PV systems up to 30 kilowatts.

The German federal government attests that the expansion of renewable energies is of predominant public interest, as it serves public safety. This importance, which is classified as very high, can become the basis for faster approvals.

According to a statement from State Secretary Patrick Graichen (BMWK) at an event organized by the Bundesverband Neue Energiewirtschaft (the Association of Energy Market Innovators, bne), the German government intends to put together a bureaucratic package by the end of the year to be brought to the Cabinet.

To sum up: A good start, but with the need for further improvement

So far, the market feedback on the Easter package is negative: The photovoltaic tender rounds since the EEG reform were undersigned. The conclusion can only be mixed.

The ambitious pace of the targeted expansion can only be achieved if a sufficient number of new PV projects are developed and built quickly enough. This would be easier through larger PV projects. The EEG 2023 tends to strengthen smaller PV projects.

Even if the level of compensation rates is raised overall, the EEG 2023 does not take the interest rate risk and rising plant prices sufficiently into account.

In order to adjust the remuneration for increased project costs, the German federal government could raise the maximum tender values, as it may do so without the consent of the Bundesrat, the second house of German parliament, on the basis of an ordinance authorization.

Barriers to grid connection, land use planning must also be removed, and tax law and approval processes must be accelerated so that new systems can be built in sufficient numbers and at sufficient speed.

To ensure that the number of new turnkey systems and project rights offered on the market increases rather than falls, the German government must make improvements to these issues. States and municipalities also have room for maneuvering that they can use to help along the energy transition.