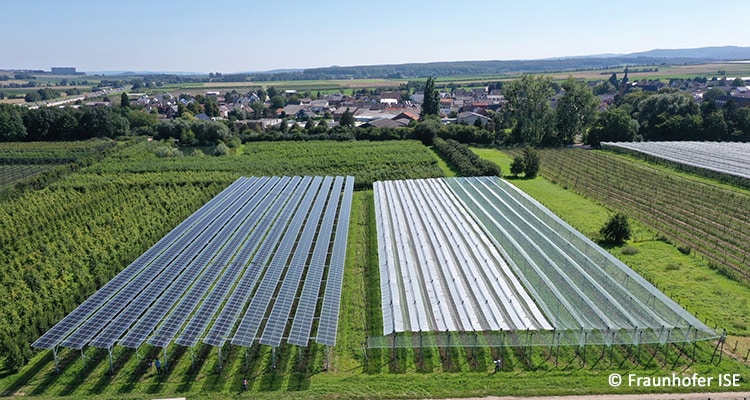 Agrivoltaics: a fad or the future?

Double the harvest and save on land, farm and operate photovoltaics in a single plot: this is the promise made by agrivoltaics. In the ongoing debate over whether land should primarily be used for food security, environmental preservation or conservation, agrivoltaics is a readily proposed alternative solution. But what can this apparent miracle cure actually achieve? Is agrivoltaics only still in its infancy, or can it significantly contribute to mitigating the climate crisis by accelerating the expansion of renewable energies?

In this article, we summarise current developments and take a look at the relevance of agrivoltaics for project developers and investors. A good overview of the situation is provided by the Fraunhofer Institute for Solar Energy Systems’ agrivoltaics guide, from which much of the information given here is taken. Equally enlightening are tender offers from the German Federal Network Agency, to which agrivoltaics projects were submitted for the first time in April 2022.

Strategically, the mitigation or even full resolution of land use conflicts is of great importance in densely populated, industrialised countries with a high demand for electricity, such as Germany. A great deal of land is needed to facilitate a rapid transition to sustainable energy, but the all-importance of food security has not diminished.

There are different forms of agrivoltaics, all of which combine farming and photovoltaics on a single plot. Particularly suitable crops include fruits, berries, vegetables and vines that do well with less light. But agrivoltaics can be arranged to work with just about all crops. Compared with single-use plots, the combination does reduce yields. This reduction in harvest should be -15 percent at most. But there are also synergy effects, which are described in this article along with other benefits for farmers.

PV systems are arranged either elevated or standing vertically between crop rows. Elevated systems come in a variety of designs and heights, usually standing at about 2.5 m in the air in horticulture and over 4 m in arable agriculture.

Various names are commonly used for agrivoltaic systems, including agrophotovoltaics, agrisolar, and dual-use solar. The concept of agrivoltaics was presented to the public as early as 1981 by Adolf Goetzberger and Armin Zastrow of Fraunhofer ISE, in the journal “Sonnenenergie” published by the German Solar Energy Society (Deutschen Gesellschaft für Sonnenenergie e.V. , DGS).

What do agrivoltaics systems cost?

According to the Fraunhofer ISE, the electricity production costs of agrivoltaics systems are between 7 and 12 euro cents per kWh. This makes agrivoltaics systems competitive with other sources of renewable energy. Their costs fall between those of large-scale commercial PV systems and small rooftop systems (< 10 kWp). However, they are about twice as expensive in direct comparison to ground-mounted PV systems.

Costs for project planning, inverters, electrical components and grid connection are, however, comparable to those for ground-mounted PV.

This said, Bavaria’s Technology and Support Centre at the Centre of Excellence for Renewable Resources (Technologie- und Förderzentrum, TFZ) has shown that the agricultural marginal return for common market crops only account for about one to four percent of the total revenues from agrivoltaics and are therefore of very little significance in overall economic considerations. With the same compensation rates, ground-mounted systems would typically be more economical on the same plot.

But the compensation rates are not the same. For the special crops particularly suited for agrivoltaics such as viticulture, fruit and vegetable cultivation, the value added per area is higher than in arable agriculture. From another angle, there is another meaning to be gleaned from in the TFZ statement: farmers operating agrivoltaics can garner significant additional income and decide for themselves when system operation, agriculture on its own, or land leasing becomes the most attractive option.

Agrivoltaics subsidies: worldwide and in Germany

In Germany, agrivoltaics was subsidised for the first time as of 2022 within the framework of the German Renewable Energy Sources Act (Erneuerbare-Energien-Gesetz, EEG). It was promoted as part of so-called “innovation tenders” with a fixed EEG market premium. The tender results provide a look into the status of agrivoltaics in Germany:

With the Easter package, Agri-PV will be integrated into the open space tenders from 2023 together with Floating-PV and Parking-PV, which should offer a permanent perspective. The higher costs are to be offset in competition for certain Agri-PV systems by a bonus, which amounts to 1.2 cents per kilowatt hour in 2023.

Along with the revenue from electricity, farms will continue to receive subsidies from the European Common Agricultural Policy (CAP), provided that the agrivoltaics system reduces agricultural use by less than 15 percent.

In addition to feeding electricity into the grid, self-consumption also has a powerful positive effect on the yields of an agrivoltaics project. The power generated can be used, for example, for a cold storage house or other agricultural applications.

According to estimates by the Fraunhofer Society, a total capacity of 14 GWp has already been installed worldwide (as of 2022). Technical and economic feasibility has already been proved in many countries. 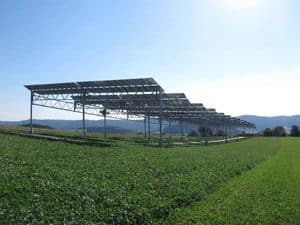 Pilot plant in Heggelbach: Arable farming is carried out under the modules mounted at a height of 5 metres.

In Germany, the initial research systems were installed in Weihenstephan in 2011 and 2013 and in Heggelbach in 2016. Germany also already has some practical systems. There are still hurdles for widespread use in Germany, now reduced with the first EEG innovation tender in April 2022 and the introduction of a uniform standard (DIN SPEC 91434:2021-05).

The potential of agrivoltaics appears contradictory: according to the German federal government, 85 percent of agricultural land is suitable for agrivoltaics. The Fraunhofer Society estimates the potential in Germany for high-mounted agrivoltaics (> 2.1 m) to lie at around 1.7 TWp, which is more than 3 times the electricity consumed in Germany in 2020. However, there does also remain potential for both vertical and ground-level agrivoltaics systems (< 2.1 m).

Who are agrivoltaics projects most suitable for?

In most cases, agrivoltaics projects should be an interesting option for any farmer looking to reap two harvests from their land. The first agrivoltaics system operated by a citizens’ energy cooperative has also already emerged.

In principle, agrivoltaics systems can also be implemented as investment objects. The larger the system, the more frequently outside capital is likely to enter the equation. However, entrepreneurial cooperation with the farmers themselves is crucial, as it provides the best possible incentive to reconcile the tandem goals of agriculture and photovoltaics in a sensible manner. From a different angle, project developers can help open up additional plots. Due to the complexity of agrivoltaics systems, external cooperation is likely to make the most sense for farmers. From the other side, investors will not want to operate photovoltaic plants and learn agriculture at the same time.

The effects of synergy for agriculture

In addition to the primary gain of being able to harvest both food and electricity on the same land, agricultural photovoltaics offer other advantages:

In emerging and developing countries, additional benefits arise from agrivoltaics. In places where solar irradiation is particularly high, the PV modules not only provide good solar protection, but also supply the electricity needed for treating drinking water. A Chinese project on the edge of the Gobi Desert also protects against desertification, which is a significant benefit as the effects of global warming increase.

The research-based guidelines can be found on the Frauenhofer ISE website. In it you will find information relevant to implementation regarding technology, cultivation crops, legal situation, and approval procedures, as well as research on the efficiency of agrivoltaics.

There is no doubt that innovative agrivoltaics systems make sense, simultaneously providing for two crucial human needs on a single plot of land: food and a liveable climate. Farmers can also take advantage of synergy to better cope with climate impacts and tap into additional revenue streams.

Agrivoltaics is relevant for both project developers and investors because it can be used to develop additional land and thus generate projects. This makes both developers and investors less dependent on specific land environments. Due to food competition, new restrictions may well emerge limiting the construction of solar farms on land formerly used for agriculture.

The 14 GWp produced by agrivoltaics worldwide accounts for roughly 2 percent of all PV installations. In order to accelerate the expansion of renewable energy in an environmentally-friendly manner, rooftop PV systems of all sizes, solar farms on various types of land, and renewable energy sources such as wind remain the main drivers of the transition to renewables. Measured in terms of total electricity demand, Agri-PV can make a significant contribution according to current knowledge.

Even though agrivoltaics is considered to have great potential for resolving conflicts over land usage, its actual acceptance on the ground is not a foregone conclusion due to the fact that it demands visible changes to the landscape. Therefore, early community involvement of local citizens is important.

Existing clashes between agriculture and biodiversity are not solved by agrivoltaics. This is something that can only be resolved by conversions to organic practices and the establishment of more nature conservation areas. But, when well-planned and conscientiously operated, ground-mounted photovoltaics can make at least a contribution to protecting the valuable biodiversity of our environment.