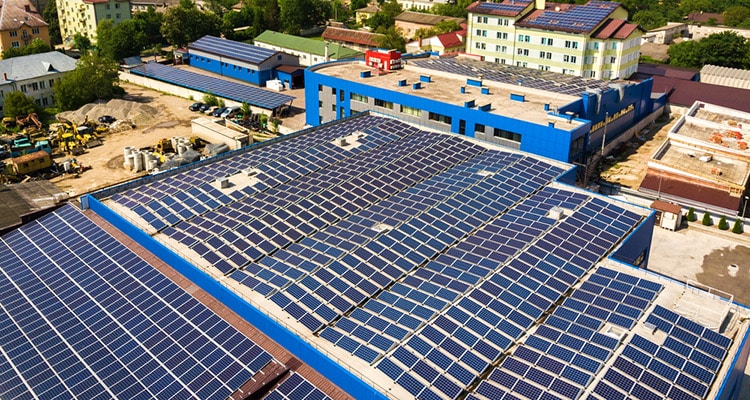 The solar mandate in industry: flat roof or pitched roof – is the required PV installation possible?

In more and more places, companies are being required to install PV systems. The ‘solar mandate’ is being pushed throughout Europe by the EU Commission and is also being planned by the current German government, but it is already a reality in some German and Austrian states.

For those responsible for their companies, the implementation of the solar mandate raises basic practical questions:

Even without the mandate, self-supply using solar power offers economic and strategic advantages for many companies. Self-generated and consumed solar power is particularly inexpensive in many cases and offers independence from fluctuating energy prices. According to evaluations by Fraunhofer ISE, the electricity production costs of solar electricity in Germany are now only between 3.12 and 11.01 euro cents/kWh, depending on the type of system and solar radiation (as of 6/2021).

Solar mandates for businesses in more and more places

Whether a solar mandate exists for your commercial buildings depends on the location and the locally applicable form of the mandate. In many places it only comes into play for new buildings, but in some cases it also applies to basic roof modernisation. As long as the roof of an existing building is not renovated, solar mandates generally do not apply. This is also a good thing: the roof under the solar system should be in such good condition that it can survive the PV system’s 20+ year service life.

If the EU Commission succeeds in its plans, new commercial buildings throughout Europe will have to be equipped with a photovoltaic system, from 2025 onwards.

The solar mandate agreed upon by the current coalition government in Germany in its coalition agreement and now waiting to be implemented also refers to new buildings.

In Austria, cities such as Vienna and Steiermark have also introduced solar mandates.

Is my commercial roof suitable for photovoltaics? 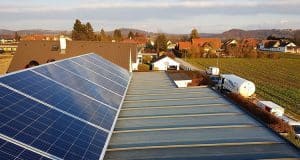 Commercial roof surfaces are mostly flat. This results in advantages but also disadvantages for the installation of PV systems compared to pitched roofs.

Sport halls, multifunctional arenas, industrial buildings, stables, covered car parks: all of these structures offer ample roof space for installing modern photovoltaic systems. In contrast to most residential buildings, however, the roofs of commercial properties are mostly flat. This brings both advantages and disadvantages to the installation of PV systems as compared to pitched roofs.

But first, one important point: check the statics of your roof before installing a PV system. The net weight of the solar system causes additional forces to act on the roof structure, and the increased susceptibility to wind and areas where snow can collect also cause additional pressure.

Advantages of a flat roof surface: here’s where the flat roof scores points

Assembly: A flat surface is ideal for installation work because it is easier to walk on. This eliminates the need for the special safety precautions required on many pitched roofs – installation on a flat roof is therefore easier.

Cooling: In order to place the modules at the desired angle of inclination, the solar modules of a PV system on a roof are elevated. This increases the air circulation beneath the modules and creates a cooling effect that has a positive impact on the modules’ efficiency.

Maintenance: Due to the distances between the module frames, which are maintained to prevent shading, the PV system on the flat roof is more easily accessible. This makes maintenance work such as cleaning, inspections or repairs easier and quicker.

Disadvantages of a flat roof: things to keep in mind

Use of space: While an advantage in terms of maintenance, the distances between the module rows are a minor disadvantage when it comes to the overall use of space. The area is thus used less efficiently overall when compared to pitched roofs. Often there are structures on flat roofs which must be given a wide perimeter due to possible shading, or so that these structures remain accessible.

Susceptibility to wind: Although the elevation of the solar modules increases the air circulation behind them, it also makes the PV system more susceptible to strong winds. It is therefore imperative that the PV components be mounted in a stable and secure fashion.

Shading: In cases of heavy snowfall, there is a risk that snow sliding off the modules will pile up, causing them to be partially shaded. This lowers yield and thus income.

Costs: Elevation on a level roof surface requires special substructures for mounting the solar modules. Higher costs must be calculated for this as compared to pitched roofs.

Do companies have to operate the photovoltaic systems themselves?

No. As a rule, photovoltaic systems can also be operated by third parties within the framework of a solar mandate. You can lease the roof area to third parties or implement the installation and operation via contracting.

The Milk the Sun operator’s guide will help you decide whether your company wants to operate the PV system itself. It tells you what you need to do as an operator, what the most important things to know are, and which operational tasks can be delegated to specialist companies.

Do you have a roof surface that you would like to lease for the use of a PV system? Use our marketplace to offer your space to an interested audience.

Who can plan and install the PV system?

You can have your commercial PV system planned and built by a general contractor to be ready for use via so-called EPC services- Engineering, Procurement and Construction. We arrange contact with experienced contractors for the implementation of photovoltaic projects.