Sustainable commitment to a better CO2 footprint as well as a new legal situation are causing a rising interest in photovoltaic roof systems among companies. But how can a company get an initial, tangible overview of the possibilities of such a project? A feasibility study, which is explained below by means of a real-life example, provides the necessary transparency.

Those who install a large-scale photovoltaic system on their building or industrial roof usually hope for more than just an improved carbon footprint for their company. Increasing the independency on rising electricity costs and the profitability of the project are also considered. In addition, in some German states the integration of a PV roof system has been declared mandatory when building new commercial properties, and in 2023 there will even be a nationwide solar obligation on new commercial buildings. But what is the maximum amount of electricity that can be produced with a rooftop system? What are the limiting factors? And how much of the solar power produced can be used by the company itself or even stored to be able to counter the rising energy prices?

A feasibility study reveals in the first step,

This case describes the feasibility study for an existing building of a motor vehicle workshop. The area of the flat roof is approx. 1,450 m² and is equipped with a walkable roof insulation panel on trapezoidal metal-sheet. The hall itself is about 9 metres high and is not affected by any external shading. There are 17 skylight domes distributed across the roof, which must be considered when planning the design of the roof with PV modules. The usable roof area without skylights is approx. 1,400 m². The assumptions of the study are from 12/2021 and are based on construction and commissioning in Q2 2022.

Clarification of technical framework conditions and objectives of the client

At the time the building was constructed, the subsequent installation of a photovoltaic system was already considered, which means that the roof structure had been designed accordingly. The maximum additional surface load of the roof is 50 kg/m². The modules can be mounted on a ballasted frame system. This would result in an additional load of 23-28 kg/m², which is significantly below the maximum value. The static should nevertheless be checked by an architect or structural engineer before construction begins due to the uneven load distribution through the mounting system.

The PV system should be aligned with the existing electrical infrastructure. The integration of the system into the building should enable the highest possible self-consumption of the electricity produced. In view of the additional consumption expected in the future due to the planned installation of electric charging stations and the possibility of participating in the energy transition, the customer aims for a maximum utilization of his roof area regarding the system design. 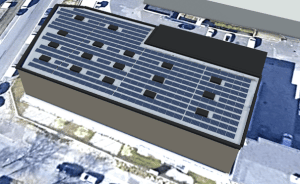 Screenshot of a planning software

To be able to estimate the electricity production as realistically as possible, a 3D planning tool was used to create an individual design for the hall roof using a proven system design. With an output of 380 Wp and a size of approx. 1.75 m², the modules are state of the art. They were aligned parallel to the edge of the roof, which facilitates installation and later also regular maintenance. However, the orientation of the roof and thus of the modules to 25° south-west leads to a yield curve that is shifted backwards in time and a slightly reduced yield compared to a purely south facing system. A final design should therefore be based on an inspection of the roof, ideally together with the solar installation company.

From a technical point of view, the maximum capacity of the roof was 130 kWp with a total of 342 modules. Since system certification is only required in Germany for systems with a size of 135 kWp or more, there is no need for a time-consuming certification procedure here, even if the entire roof area is fully covered with modules.
To determine the future energy yield of the photovoltaic system, a yield simulation was carried out based on the created system design. Local irradiation values from past years were used to calculate the yield as accurately as possible. This resulted in an annual electricity generation of 118,190 kWh.

To reduce the energy demand from the grid, the solar power must be consumed at the time it is generated. By using a battery storage system, the external power consumption could be further reduced. In this case, the calculation of the cost savings for the self-consumed electricity and a calculation of the remuneration for the fed-in electricity without storage was carried out. For this purpose, the expected amount of electricity produced and consumed was multiplied by the current electricity purchase price from the current energy supplier. This was 0.27 €/kWh when the feasibility study was prepared. The exported energy was added with an assumed remuneration of 0.05 €/kWh.

The specific installation costs were determined based on standard market prices and relevant empirical values from greentech. For turnkey systems of this size, a price of 750 €/kWp was calculated at the time of the study. For the planned system size of 130 kWp, investment costs of € 97,500 can be expected on this basis.
To get an idea of the economics of the system, the levelized cost of energy (LCOE) was calculated. They are defined by the total costs of the life cycle of the plant (acquisition costs as well as operating and repair costs) and the energy production over the total life cycle. The following relevant parameters were determined for the plant in question:

Since the electricity production costs are significantly lower than the electricity purchase price of 0.27 €/kWh, a positive business case results for this case. It can be assumed that the plant will pay for itself after 6 years.

A feasibility study provides the owner of the roof area with an initial idea of the feasibility and economic viability of his PV project. It provides information on whether the roof area is suitable for the installation of a PV system under the given conditions.

In the positive case, the investment costs of the system pay off much quicker than the assumed total lifetime: The system thus ensures a reduction in external electricity demand and a more positive CO2 balance for the company. With an early payback, lower energy costs can be expected overall. Increasingly, storage solutions are also becoming attractive that allow for a time-shifted consumption of the self-produced electricity, which further reduces costs in the long term and reduces dependence on rising energy prices. However, here, too, the additional investment costs of a storage system and its service life must be calculated against the reduced external electricity demand and the overall economic viability must be examined at the end.

The actual specific acquisition costs have increased in recent months due to the sharp rise in raw material and logistics prices. Before awarding the contract, the installer should therefore determine current prices and use them for the final calculation. However, the significantly rising electricity costs can usually compensate for the higher investment costs or even result in an even more positive business case.