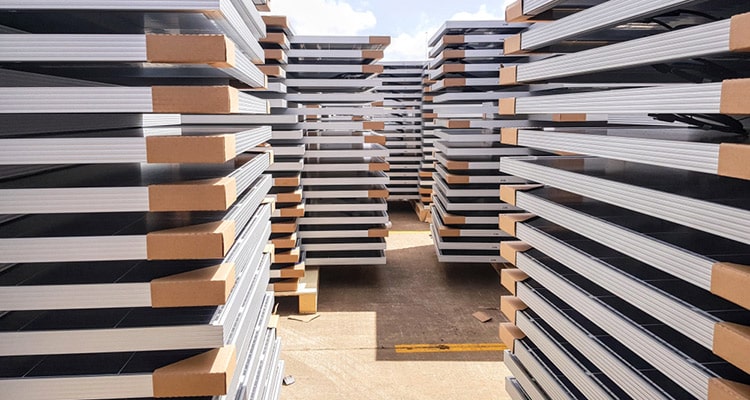 Wholesalers at the breaking point – The need for forward planning

We in the solar industry are accustomed to our fair share of craziness. For us, predictable business isn’t the rule but the exception. It’s normal for us to come up against all kinds of unknown variables and make our peace with them. Those who have mastered this talent through years of experience are also likely to guide their companies through these turbulent times. But nonetheless it has to be said: the photovoltaic market has not been as wild as it is now for a long time. The price of everything is rising steadily, excepting only solar modules. Here, I’ll explain why.
Shortages and disrupted supply chains are colliding with rapidly increasing demand. This demand comes not only from the big players such as energy utilities and large project developers, where multi-megawatt plants are being built or announced one after another, but the small-scale sector as well, which is still booming as before. One casual mention in your own neighbourhood that you’re involved with solar plants and you’ll be besieged by a dozen interested parties, all of whom want to set up their own generator plants or are looking for a good installer. And it’s right there where the problems begin.

Anyone who has been in the solar industry for a while is all too familiar with the time frames to be expected in the distribution market. Even in the 2010s, scrambles frequently arose for short-notice inverter and module cluster availability. But in those days, there was still reasonable certainty that goods ordered and confirmed by the manufacturer would arrive in the foreseeable future. Installation dates could also be predicted with some reliability since materials and personnel were usually available on time. But currently, these processes are no longer predictable but instead chaotic and subject to random chance.

A great number of wholesaler dealers have already stopped accepting enquiries and orders and temporarily deactivated their web shops, customer hotlines or even closed their general e-mail inboxes. The rush and the volume of requests are overwhelming and can hardly be processed to the benefit and satisfaction of customers. This high volume has caused response and processing times to increase significantly. If every customer then also sends in anxious, short-notice follow-up questions, even more staff time is monopolised and everything takes longer for everyone. On the other side of things, most manufacturers can provide hardly any timely and reliable information regarding availability and delivery times, and no meaningful information can be passed on to their own customers. These customers then move on to the next potential supplier and the game starts all over again. Suppliers might then have to deal with over-ordering and the likelihood of reliable delivery forecasts decreases even further – a vicious circle.

As more and more wholesalers dealers refuse to accept orders, the situation automatically becomes worse for the remaining suppliers. This will continue until the last supplier has closed its channels to prevent burnout among its employees. This is not intended to land the blame on the installers. They are being put under the same pressure from their own end customers. For them, it’s hard enough to get even a non-binding offer. Should they manage to secure an order, it’s understandable that they should also want to know when the installation of the photovoltaic plant can begin.

Assembly interruptions have become the rule

And here the process once more comes to a standstill. It is now almost impossible to complete assembly all at once and without interruptions. Modules may still be available, but parts of the substructure might be missing. Without these components, roof installation certainly cannot begin. And even if everything is complete on the roof, continuation of work is still a long way off. First of all, the inverter and, if necessary, storage and sensor system have to be ready. These components are often indefinitely out of stock, and so completion of the plant is delayed. Last but not least, it can be anybody’s guess as to when the grid operator will take the time to connect the grid or set the new meter.

Swift, smooth installations are the stuff of the past – they rarely go to plan anymore, even for small installations. Nowadays, we have to deal with a stop-and-go process that tests the patience of everyone involved to the breaking point. As a result, the all-too-scarce capacity for assembly which is actually available cannot be used efficiently. An installation operation requires large quantities of all necessary individual components to be delivered and stocked, early and on spec, in order for all small plants to be installed in succession and on schedule. Only a few big players can possibly manage this because it demands liquidity and storage capacity. Then, there is always the risk that there will be an intervening change in the landscape (either politically or technically) and the components in storage will become the wrong ones.

Module price increases have slowed down

The increase in module price has slowed down in recent weeks and shows signs of coming to a complete standstill in the coming months. This is primarily due to the fact that quite a few installations are delayed and planned projects postponed. While small-scale installers can expect homeowners to wait months for the completion of roof systems due to a lack of inverters and energy storage, this is rarely the case for larger-scale projects. Generally, financing cannot be stretched out over months or postponed. This means that no modules are purchased without the certainty that the other components are available. At the moment, this causes more special items and overproduction to wind up on the open market, putting pressure on high module prices. It’s difficult to predict for how long this trend will continue.

We can presume that after the market and prices cool down a bit in autumn, demand will pick back up again with supply chains still disrupted. Overall, anyone in investment and construction would be well advised to plan projects with foresight and for the long term. A lead time of 4 to 6 months, even for mid-sized and small installations, should significantly increase the reliability of planning. Required components should be ordered from suppliers early, even at the risk of having to pay slightly more for them. But a higher purchase price is certainly still preferable to ending up without material and having to postpone the start of a project.

is a qualified electrical engineer and has been active in the photovoltaics and renewable energy sector for over 25 years. In 2004 he went into business independently and founded the internationally-renowned online trading platform pvXchange.com, a marketplace where wholesalers, installers and service companies can acquire standard components as well as solar modules and inverters. Purchased from stock remainders, these are parts which are no longer manufactured but are crucial for repairing defective photovoltaic systems.