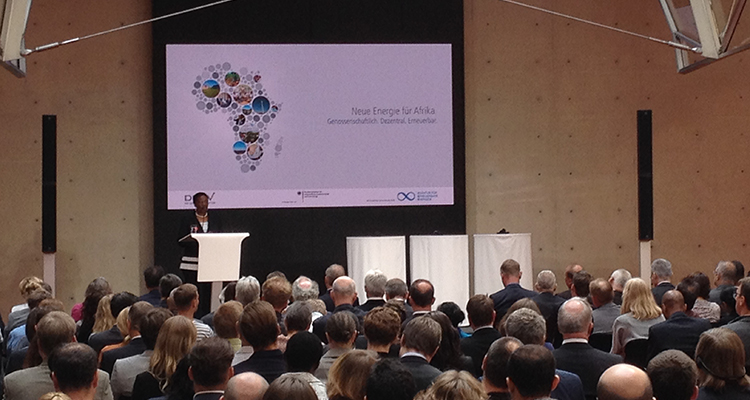 Germany to further support growth of renewables in Africa

During a recent congress, German Development Minister Dr. Gerd Müller announced further support for the growth of renewable energies in Africa. He used the congress as a platform to present his new concept of a green civil energy, which is strongly based on investments by communities and cooperatives.

This week, the DGRV held a summit in Berlin, focusing on the topic of new energy sources for Africa and solutions that are renewable, decentralised and cooperative. The Deutsche Genossenschafts- und Raiffeisenverband e.V. is the cooperative federation for German cooperatives. Milk the Sun was taking part in the summit as auditor.

German Development Minister Dr. Gerd Müller pointed out the goal of nurturing the cooperation with the African continent concerning renewable energies. To bring this along, he has created a new concept of a green civil energy, which he presented during the congress. The initiative relies strongly on investments by communities and cooperatives.

The decentralised energy solutions of the concept aim to bring energy even to the most remote areas of the continent. According to Müller, cooperatives and communities were the main factors that helped bring along the energy transition in Germany. Hence, he is planning on involving them strongly in the process of doing the same in Africa.

Irene Muloni of Uganda’s ministry for energy and mineral development expressed an appeal to the audience: “Help us to convert Africa from the dark continent into a bright green one!”

Dr. Eckard Ott, chairman of the DGRV, explained that energy cooperatives enable the public to participate in the energy transition. They support the regional economy and strengthen the acceptance of renewable energies. These advantages are meant to be used in Africa as well.

During the past 10 years, as many as 850 energy cooperatives have been founded in Germany alone, with over 180.000 members. This resulted in massive investments of over 1.8 billion Euros in renewable energies and local economies. Regional project developers, craftsmen and banks are strongly involved in getting the projects up and running.

In order to make the new concept successful, some requirements need to be met: good legal foundations, affordable technology as well as the know-how and initiative of the people are, according to Ott, major factors. A partnership with German energy cooperatives can help stengthen these in Africa.